The first strip was

applied with the subject in a position

combining cervical side bending to the

contralateral side and the arm reaching

behind the back as if reaching into the

contralateral back pocket. The second

strip was a Y-strip representative of the

deltoid, also applied from insertion to

origin with paper-off tension. The second

strip was applied with the first tail

to the anterior deltoid while the arm was

The tail for the posterior deltoid

was applied with the arm horizontally

adducted and internally rotated as if

reaching to the outside of the contralateral

20 cm in length, was either an I-strip

(no cut down the middle of the tape) or

a Y-strip, depending on shoulder contour.

It was applied from the region of

the coracoid process around to the posterior

deltoid with a mechanical correction

and downward pressure applied to the

KT) at the region of perceived pain or

technique was applied with the upper

extremity externally rotated while at

the side. The upper extremity was then

moved into shoulder flexion and slight

horizontal adduction as the end of the

tape was applied with no stretch. 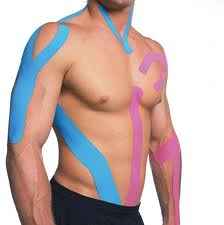